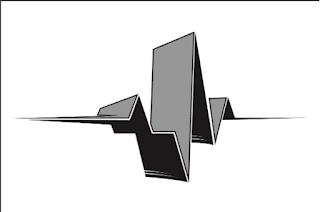 Miller and Shellabarger, the artist collective responsible for the final edition of stŬ on Sunday night, are a married couple with (almost) identical long gray beards and shaved heads. According to their web site, their work "documents the rhythms of human relationships, speaking both to common experiences of intimacy as well as the specifics of queer identities. Their performances, always enacted together in public, push simple materials and actions to almost Sisyphean extremes." The idea of human relationships, intimacy and the specifics of queer identity carried over into their offering on Sunday night--a spicy peanut stew served over rice from Africa, with a yoghurt or sour cream topping to soothe the palette and offset the spiciness. Spiced cashews were available for those waiting in line, and a small tea candle was handed out with each serving of stew--suggesting both an intimate performance between two people and pointing to the queerness of that intimacy, which probably was not between lovers at the festival. 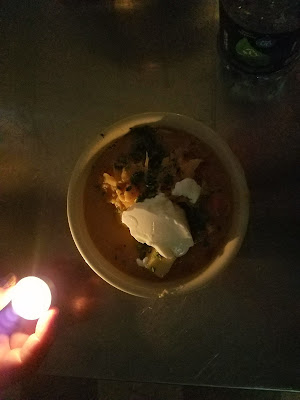 Organized by Carlos Salazar Lermont, the panel, which convened in the DFB Garage, dealt with the issue of organizing and funding art events. The panelists, Jackie Taylor Joseph Raven Mark Jeffery and Angeliki Tsoli, have all had experience with organizing alternative events and raising the money to support alternative institutions. Given the current political climate, the discussion was quite interesting, as it turned out that many of the panelists were already very savvy about raising money from non-traditional sources. Jackie Taylor is currently putting together a program to serve very young children--probably the most important and formative age. In spite of the heat, the discussion was lively and animated. 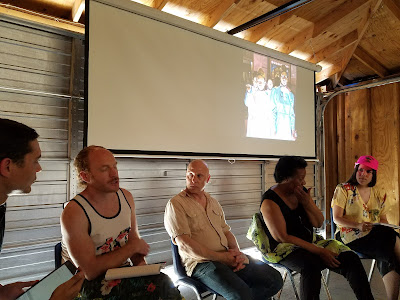 Fereshteh's Toosi's Driftwood according to her website, "is a contemplative, guided walk informed by environmentally-focused healing practices such as shinrin yoku (forest bathing), horticultural therapy, and ecotherapy. Participants will explore the connections between wellness and outdoor access while learning about the immigrant history of Eckhart Park."

The audience/participants met Toosi in front of DFB. Many more people showed up then signed up (the author was one of those who forgot to sign up) so Toosi kept her remarks short and led everyone in the direction of Eckhart Park a few blocks away. Eckhart Park is refreshingly verdant and cool. A green oasis in this midst of the urban neighborhood, it has been the site for several Rapid Pulse performances, including Alejandro T. Acierto's Untitled Action (2016) and John Court endurance performance 7 Hours 30 Minutes Untitled (2015).

Toosi first took everyone to a spot under several trees and asked people to stand in a circle and close their eyes. With eyes closed everyone turned around, noticing sounds, smells and experiences that they might not have noticed if their eyes were open. From there, people moved slowly across the park in a kind of meditational walk. Some people took off their shoes, and some people, overcome by hay fever and insects, quietly left the group.

Once the group reconvened, Toosi posed several questions to the group, such as thinking about how trees branch out above and below the ground and the way that this might relate to human migration and immigration. The group then moved to the far corner of the park and worked in groups of 2-4 to think about what it meant to belong to a community and how their identity might have changed if they had relocated to Chicago. Everyone dispersed again in order to find a tree and sit with it for about 30 minutes. Finally, the group reconvened in the gated portion of the park (this included a water attraction and playground equipment for children) and sat in a circle. Over plantain tea (the plantain is a native plant that can be found all over Eckhart Park and has healing properties), everyone shared their experiences before drifting back to the gallery. The entire piece was really powerful--very meditative and non-judgmental. 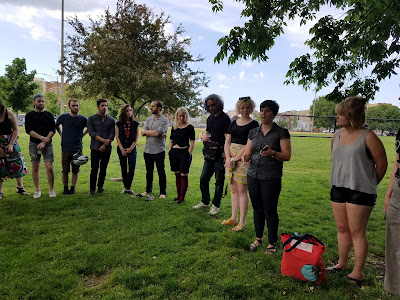 Project, according to the description provided by the artists, was a kind of latter day Frankenstein monster tale, set in a post-human, cyborg world in which unnatural nature has overrun technology. The performance opened with Gressman, a barefoot Dr. Frankenstein with white lab coat, goggles and an Tablet, poking and prodding at someone or something draped from head to toe in a white sheet. The operating theater, far from being pristine, is seemingly overrun with flora and fauna that is vaguely menacing, overly colorful (suggesting human engineering or radiation) and encroaching upon the surgical equipment. Lifting one side of the sheet, Grossman poked and rummaged around underneath it, periodically throwing out bits of grey slime--made of the same substance as the Slime toy (manufactured by pillo) that showed up in 1976: a viscous, squishy and oozy material, generally colored, made from guar gum. Suddenly, an impossible figure, part plant, part animal, part human, and part cyborg, emerged from under the sheet and fell to the floor. Keening and wailing against a background of electronic of music, the creature wreathed around on the floor, slashed what looked to be a bag, worn externally, of blood, and finally expired, at which point the performance was over. 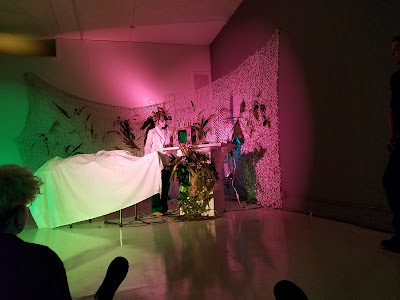 The description of Project, posted on the Rapid Pulse website, suggests a post-apocryphal scenario, in which everything that was once "nature" has become toxic and diseased.

Set within an oozing laboratory of the grotesque, a mysterious surgeon builds a monstrous and beautiful creature merging complex sonic biotechnologies with gooey protean substances cultivated from the surrounding tropical overgrowth. The creature rises from the operating table, quivering insect-like between life and death, crying out in operatic bursts of pain and despair that prophesy the oncoming ecological apocalypse and unveil an emotional jungle of queer experience. As it grasps for the sublime, the creature finds itself unable to escape the technologies and manipulations of the surgeon who gave it life, bound by humanity’s dark limitations. Nature’s final resistance crumples into silence, its warning fading off into the landscape.

McParlane and Gressman have always been concerned with queering the categories of human/animal/plant/object through what could be seen as kind of excessive drag. Performed the week before Pride, Project suggested that there needs to be a more complex understanding of what constitutes human and who is permitted to be human, particularly given the pushback against LGBTI rights. Project also suggests that humans are enmeshed within the environment that produced them, and that is time to began to reverse the human imprint. From the time that they climbed to the top of the food chain until today, humans/homo sapiens have impacted the environment to a disproportionate degree, causing the extinction of species, plant life, and many of their hominid relatives. In the week following the decision on the part of the current POTUS to withdraw from the Paris Agreement, McParlane's and Gressman's performance is a reminder of what might happen if we don't pay attention to the environmental toll that has happened during the Anthropocene. 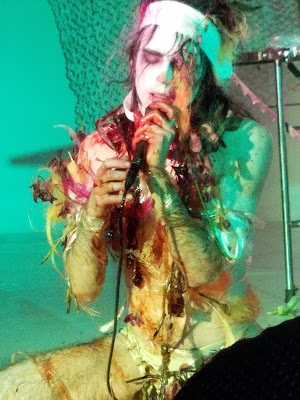 The Video Series was screened this year in several different locations: the basement, the main gallery, and, on the final night the garage, which allowed the DBF crew to prepare the space for the final performance by Carlos Salazar Lermont. In keeping with the three performances that took place both on and off site, the theme of the final night of video pieces, curated by Giana Gambino, was embodiment and identity. Wilhelm Wilhemus's and Arianna Foks's Distraction is a video tape of a performance during which Wilhemus winds a white string around his head that unspools for Foks's mouth. The binding or encasing of the head in performance art has become a rather common motif--in this short piece it becomes a negotiation with an implied sexual tension between the two performers who are being strangled/choked by the string. The video was made by videographer Tomasz Szarama for a joint project Not Ready Yet. Other standouts included Victor de la Roque's interactive piece that required the audience to move around and change places and Francesca Fini's typewriter with nails covering the keys, resulting in hands that become increasingly mangled and a letter smeared with blood. For more on the video series, click here.

The final performance of the evening was by Carlos Salazar Lermont. The performance begin with Salazar Lermont, garbed neatly in a reddish brown shirt, black pants, and black shoes, seated next to a wooded bunkbed. Salazar Lermont moved the bed towards the back of the gallery, then moved it back. Four volunteers were enlisted: They took the top mattress off of the bed, jumped on the mattress, and then returned to the audience. 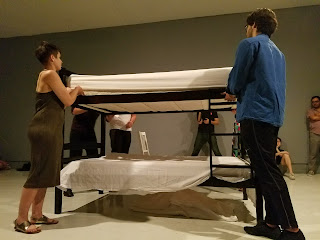 Salazar Lermont placed long stemmed roses and a dead fish onto the lower mattress and gently covered them with a sheet. Shortly after, as though performing a magic trick, he pulled the sheet back off and held the fish and the roses aloft, even though they hadn't really changed. Holding the roses and fish aloft, Salazar Lermont climbed up to the top bunk and balanced on the slats as though he were walking on a tightrope. 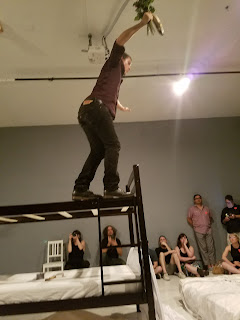 The roses and fish were wrapped and displayed in the discarded sheet/altar cloth. Seemingly from out of nowhere, Salazar Lermont produced an electric chainsaw, which he used to cut the bed in half. He nailed the fish and the roses to a makeshift cross that he fashioned from the broken bed slats, doused them in lighter fluid and set them on fire, again holding the flaming crucifixion aloft. 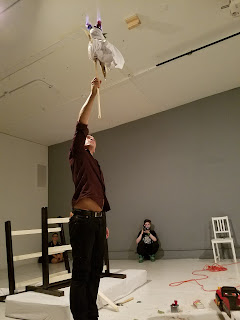 The performance ended with Salazar Lermont stamping out the fire on the floor of the gallery, leaving a bloody fish and wilted roses in his wake. 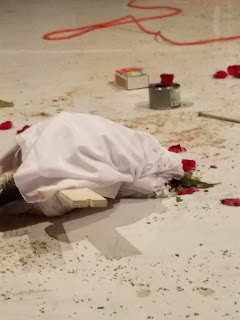 Salazar Lermont is from Venezuela, a country that is in a great deal of trouble these days, with people unable to find food, medicine, work or even a place to live. On his blog/website, Salazar Lermont has posted the following declaration:

Starting today, I, Carlos Salazar Lermont, Venezuelan artist, curator, producer and teacher, commit to adjust to a severe austerity regime, based on avoiding any kind of vain expense in daily life. Any exception will be documented and justified. This spent cut to achieve higher goals, more meaningful for personal fulfillment

The performance seeks to reflect on the effectiveness of austerity regimes to which undeveloped countries are forced to fit their economies. The personal scale acts as an analogy of the macro economic systems that significantly affect our lives as citizens. Its failure or success hopes to aid the political stand of individuals on that matter. 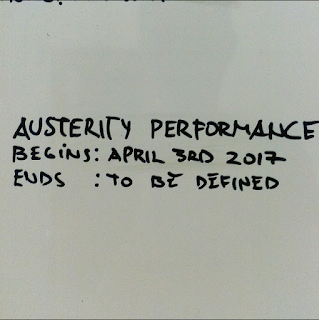 On the one hand, Salazar Lermont's performance at Rapid Pulse 17 can be seen as part of a tradition of action art, in which a sequence of actions reminds the audience and the artist of the malleability of materials, the vulnerability of the artist's body, and the process and difficulty of making artwork. On the other hand, it is difficult to not read this performance from the context of Austerity Performance, which has been ongoing since April 3, 2017. The bunkbed, which looks like the institutionalized furniture found in immigrant detention centers and also recalls the beds upon which political prisoners were tortured in Chile, Argentina, and Brazil, had to be literally torn/sawed in half. The rose/fish crucifix, a symbol of both sacrifice and blood, had to be destroyed. It was as though Salazar Lermont was condemning the oppressive colonialist/imperialist/religious triad that had led his country to the brink of ruin, redemption promised through a fiery cleansing.

The festival ended with this piece. Rapid Pulse 17 (and Salazar Lermont) are presently on the road, stopping at Spreadart in Detroit and then Rosekill in New York. For more about the Rapid Pulse Tour, please click here. 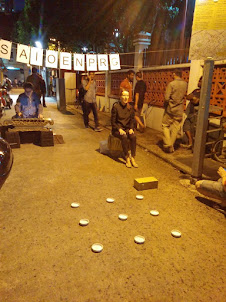